I would like to thank my great friend and fellow historian Charlie Sheppard for this blog post. I was so sad not to be able to come with her, and fellow graduate students from Southampton University, to Salisbury as I was at an archaeological symposium. But her insight into the Cathedrals history and her experience in visiting the world famous site has been eloquently laid out in this blog post she has so kindly written.

It was my first time visiting Salisbury with some friends was delightful and the cathedral was an unexpected stunner in this quaint English city.

Having not known much about Salisbury or its cathedral, its size and splendour were a surprise to me upon first seeing it. The cathedral looked beautiful with its grand medieval architecture and detailed carvings, while the whole building was surrounded by neat green grass. It was a fairly sunny day which made it all the more pleasant on the eye.

As you make your way towards the inside of the cathedral, there is an open courtyard with a trim of large archways, where there is a café and other facilities. These archways are known as the cloisters; the largest of their kind in any British cathedral as they were built for processions to go down.

We then made our way to the Chapter House where the Magna Carter is kept, on the opposite side of the cloisters. This was a small, octagonal room with arcade seats around the walls and a magnificent ceiling. This, along with the beautiful stained-glass windows, was really visually striking. Some stories depicted in these stained-glass designs include Adam and Eve being expelled from the Garden of Eden, and Moses and the Ten Commandments. The Chapter House was originally used in 1266 as a meeting place for the Dean and the Chapter of the cathedral. We wandered around the edge of the room looking at the prayer cushions with names of saints, trying to find one of our names. We were pleased that we managed to find a Catherine!

Now onto the star of the show- the Magna Carter. This can be found in a mini dark-room within the Chapter House, to prevent light damage. The document dates to 1215 and decreed that all citizens including Royals had to abide by the law, as well as declaring some important tax legislation. The tiny, neat writing impressed us almost as much as the fact we were looking at an extremely well-preserved document that was over 800 years old.

Moving away from the Chapter House and into the main cathedral itself, the tickets did somewhat confuse us. The payment is a ‘suggested donation’ of £6.50 for adults and £4.50 for students. Upon entering the actual cathedral, we were given free guidebooks which detailed a map of the cathedral with some information. The inside was equally impressive as the outside, yet not as decorative as we had expected. The beautiful intricate stained glass was, as usual, my favourite part of the interior. Our group was most surprised to see a giant 7-metre globe hanging inside the cathedral at the front, something not usually seen in this sort of setting. We then found out this was part of the Salisbury International Arts Festival Event, called the Gaia Exhibition. This is due to be in place from 24th May to 9th June, and has been travelling the world as an art installation. This added yet another element to the unexpected beauty and uniqueness of Salisbury cathedral. 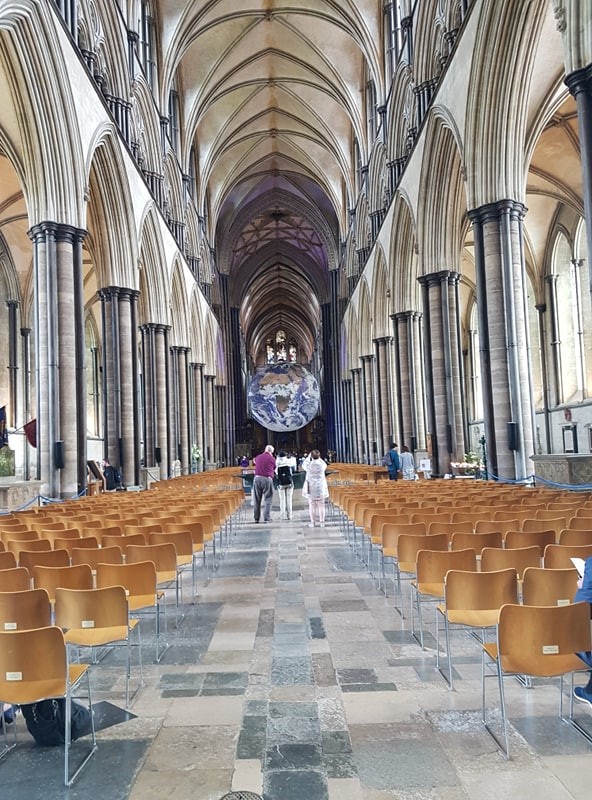 As well as taking in the overall beauty of the inside of the cathedral, you can also read one of several historical information boards in the cathedral. These detail the building of the cathedral which took 38 years, plus the story of the famous organ by Father Henry Willis in 1877. I was interested to see the information about Willis’ organs at the Great Exhibition of 1851 in the famous Crystal Palace, a topic close to my heart after studying it for the past year at university.

A trip to Salisbury would not be complete without visiting the cathedral, as both the beauty of it and the rich history we learnt about were fitting to the picturesque and old-fashioned atmosphere of the city.

Follow The Time Traveler's Daughter on WordPress.com
My Tweets